Review of The New Men by Jon Enfield 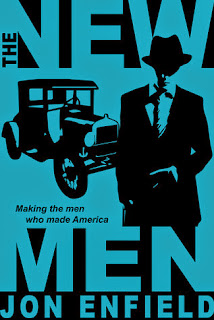 I was more than happy to receive a copy of Jon Enfield's historical novel The New Men, published in May of this year by Wayzgoose Press, as part of a TLC Book Tour. This literary and inventive novel offers interesting characters and a compelling plot, as well as a fascinating look at parts of American history that are not often covered in historical fiction.

The Story: Antonio Gramazio, a boy from a dirt-poor Italian village, comes to America at the start of the twentieth century—and becomes Tony Grams. As a young, college-educated man living in Detroit, Tony finds a job with the Ford Motor Company, which makes the famous and coveted Model T.

But Tony’s job isn’t making cars. Tony works for Ford’s Sociological Department, an educational unit in the company charged with shaping the autoworkers on the factory line, many of them recent immigrants, into “new men.” Tony’s duties involve visiting workers at their homes and encouraging them to save money, live in acceptable housing, speak English, and avoid alcohol.

At home, Tony is responsible for his mother, sisters, and brothers, and he takes both his family and work duties seriously. But Tony’s life gets complicated when he meets a wild and emotionally damaged socialite and her wealthy Jewish family. As the U.S. enters World War I, the pressures on Tony mount, and he begins to question the underlying assumptions behind Ford’s creation of "new men."

My Thoughts: Good historical fiction, for me, should do two things: first, offer a compelling story, and second, teach me something new about a period in the past. The New Men does both. The story of Tony and his family’s journey from Italy to America, and Tony’s emotional journey through his work at Ford’s Sociological department, is both absorbing and interesting. The adjustment of Tony and his family members to life in America provide my favorite parts of the novel; Tony and one of his sisters assimilate quickly, while his mother and another sister have one foot back in the Old Country. Although I’ve read a lot of novels about immigration, Enfield manages to offer a fresh perspective on the topic here.

I certainly did learn new things about the time period. Reading about Ford's involvement in the private lives of its employees was fascinating. To our eyes, it seems remarkably intrusive and paternalistic that a company would feel the need to instruct its employees in "proper" behavior. Of course, interesting connections to reform movements throughout American history can be made here; the middle and upper classes have often thought that the poor and recent immigrants need to be taught to live cleaner, more sober, more acceptable (meaning, essentially, middle class) lives. I also found Tony's involvement with the American Protective League, a citizens' vigilante group attempting to ferret out disloyalty to the US government, to be very interesting.

One aspect I appreciated in The New Men was a realistic portrayal of a character’s reaction to the news that a family member might have been gay. Too often in historical novels, I’ve come across a scene in which a character lovingly accepts a gay or lesbian character. This, unfortunately, is probably ahistorical; it’s what we might wish would have happened, but authors shouldn’t try to impose our current acceptance of different sexual orientations into the minds of those who lived in the past. Enfield understands this, and it was refreshing to read a scene in which Tony lashes out at the idea that someone close to him may have had a love affair with a man. It’s a painful scene, to be sure, but realistic. This is a good example of Enfield’s close attention to historical accuracy.

I’d offer a few small critiques of the novel. The corporate espionage sections were a tad complex, and to my mind, not necessary for the main trajectory of the story. Sometimes, I felt, the novel was perhaps a little too ambitious and covered more big topics--labor strife, racial tension, xenophobia, world war--than could be successfully integrated into one storyline.

But overall, The New Men is a well-written, impeccably researched, and original historical novel. I would recommend The New Men to readers who like literary fiction, as well as those who read primarily historical fiction. I will look forward to whatever topics Jon Enfield chooses to tackle next in his fiction!

Many thanks to Wayzgoose Press and to TLC Book Tours for the opportunity to read The New Men and to participate in this blog tour.

You can visit the other stops on the TLC Book Tour for The New Men here. 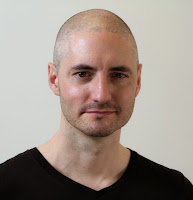 About Jon Enfield: Jon Enfield has written for a range of audiences and publications. His work has appeared in Conjunctions, Poetry Ireland Review, Underground Voices, Xavier Review, and Forbes.com. He is a former fiction editor of Chicago Review, and he taught writing at the University of Southern California for several years. He received his Ph.D. in English from the University of Chicago for his dissertation on the relationships between American film and fiction from 1910 to 1940. The New Men arose from his longstanding fascination with American in the early twentieth century and from his sense that the emergence and evolution of the American auto industry shed light on some fundamental realities of present-day America.

You can connect with Jon on his blog at: To Burn from Within.