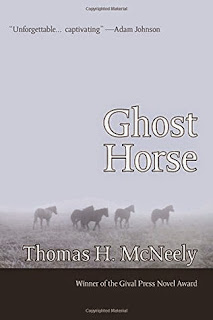 Ghost Horse by Thomas McNeely is a powerful debut novel; it is both a deeply moving coming-of-age story and an intense psychological portrait of a family in crisis. McNeely weaves an intricate web of a plot against the backdrop of the racial and class tensions of Houston of the 1970s, and explores themes of love, lost innocence, loyalty, and broken families. The tale of eleven-year-old Buddy over one unsettling year of his adolescence makes for a compelling and worthwhile read.

Synopsis from Publisher: Set amidst the social tensions of 1970s Houston, Ghost Horse tells the story of eleven-year-old Buddy Turner's shifting alliances within his fragmented family and with two other boys--one Anglo, one Latino--in their quest to make a Super-8 animated movie. As his father's many secrets begin to unravel, Buddy discovers the real movie: the intersection between life and he sees it and the truth of his own past. In a vivid story of love, friendship, and betrayal, Ghost Horse explores a boy's swiftly changing awareness of himself and the world through the lens of imagination.

My Thoughts: Ghost Horse is beautifully written. McNeely’s dialogue is sharp and believable, and he skillfully creates a suspenseful, dark atmosphere that fits the intensity of the story perfectly. The characters are richly drawn; Buddy’s two grandmothers, each controlling and difficult in her own way, his hardworking and hopeful mother, his volatile father swinging wildly from one extreme to another, the cold-eyed bully at Buddy’s new school—they all come startlingly, fully to life.

Importantly, McNeely gets Buddy’s adolescent voice exactly right. Buddy is on the cusp of change, sitting at that precarious transition between childhood and adulthood; I’ve read precious few novels that capture that charged passage so exactly. Buddy's anxiety and angst, as he struggles with difficulties at home and at school, are palpable. As the adults all around Buddy make bad decisions, tell lies, and prove themselves to be mostly unreliable, Buddy must learn--at far too young an age--to make his own choices and guide himself through the rough times ahead.

McNeely touches on many themes in Ghost Horse—race, class, sexuality, lost friendship, bullying, and abuse, to name a few, and I could hold forth about how McNeely sheds light on all of these. But one issue that struck me in particular as I read Ghost Horse was that of broken families, and the tumult that divorce causes for children. Divorce felt like a great and terrible scourge to those of us who grew up in the 1970s; at least half of the kids I knew suffered through the break-up of their parents, and the rest of us feared it. McNeely demonstrates how Buddy tries to make sense of his parents’ arguments and actions, but of course he can’t fully understand the complexity of their emotions. He’s trapped in a chaotic situation that is none of his own making, forced to choose between his parents and to deal with issues that no child should have to consider. As a reader, I wanted leap into this story and hug this boy, and give him back a carefree childhood with no greater concern than creating an animated movie with his best friend.

And the “Ghost Horse” itself—what a haunting image. The Ghost Horse, from the Super 8 movie that Buddy and his Latino friend Alex create, appears like a mythological creature . . . symbolizing, perhaps, escape, freedom, and strength. The Ghost Horse represents a world in which things are still black and white, while Buddy’s world has turned to confusing and constantly shifting shades of grey. If only the Ghost Horse could fly in and save Buddy; but Buddy, must, of course, find a way to save himself.

I could go on, but this is becoming a lengthy review, indeed. Let me sum up by saying that Ghost Horse is a gripping read—I turned the pages feverishly, desperate to know what would happen and if Buddy would be okay. This is a story that unsettled me at times, but will stay with me. I highly recommend this novel for readers who love literary fiction and complex family stories.

I received a complimentary copy of this novel from Gival Press. Thank you to TLC Book Tours and Gival Press for the opportunity to read Ghost Horse and participate in this blog tour. You can visit the other tour stops on TLC’s website here. 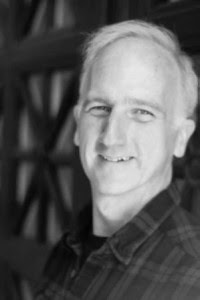 About Thomas McNeely: A native of Houston, Texas, Thomas H. McNeely has received fellowships from the Wallace Stegner Program at Stanford University, the Dobie Paisano Program at the University of Texas at Austin, and the National Endowment for the Arts, as well as from the MacDowell Colony, the Helene Wurlitzer Foundation, and the Vermont Studio Center. His fiction has appeared in The Atlantic, Ploughshares, The Virginia Quarterly Review, and Epoch, and has been anthologized in Algonquin Books’ Best of the South and What If?: Writing Exercises for Fiction Writers. His non-fiction has appeared in Ninth Letter and The Rumpus. Ghost Horse is his first book. He teaches in the Emerson College Honors Program and the Stanford Online Writing Studio, and lives with his wife and daughter in Cambridge, Massachusetts.